Given the success of the CTICC (Cape Town International Convention centre) an expansion was bound to happen. So yes, Phase 2 is announced…in fact Phase 2 was apparently planned before the current CTICC was even built. 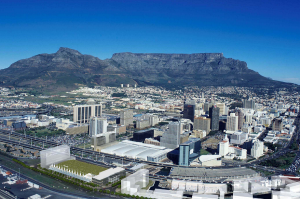 Whilst exact details remain, at best, part of the rumour mill and sketchy the following “facts” have emerged.

2. The proposed site was  originally directly across the highway taking over the area now occupied by Customs House

3. However the extension is now proposed to be moved to the open site next to the current building – in front of the Naspers building.

4. Negotiations between the city and the Department of Public Works are yet to yield agreement on the expansion of the centre on the foreshore

6. The current CTICC hit their 10 year target in just under 4 years.

Now it would be really good to see some proposed plans at this stage. I have heard (again through a true Cape Town rumour mill…so use at your own peril) that they propose putting the exhibition halls on level 1, not ground. Loadin is therefore via a ramp. Have we learnt nothing from the Good Hope Centre!? Exhibition venues must be built on ground level with easy large vehicle access.

Cape Town is just about to submit a bid for COP17, the United Nations (UN) Climate Change Conference which will be held in South Africa in December 2011.

Durban and Johannesburg are also expected to bid for the conference. COP15 made Copenhagen the most searched term on Google in December 2009 when COP15 was hosted in Denmark.

Rashid Toefy, CEO of the Cape Town International Convention Centre (CTICC), says, “COP17 would be the ultimate win. It’s the biggest UN Conference outside of New York, with 24 000 delegates for the formal conference and an additional 15 000 at parallel events. This would be on the level of another World Cup for us.”

COP17 represents about the maximum size the CTICC can currently handle at a push meaning a well designed second rendition of the now iconic CTICC foreshore building is required to maintain Cape Towns status as South africa’s premier Conference destination.

Coupled with a local government that seems intent on rejuvenating the city centre come hell or high-water, thing are definitely on the up for Cape Towns business tourism market.

Hope to see you there

When is it a Good Idea to Rent an Exhibition Stand Rather than Buy One?
African Utility Week 2011 – Africa business